Vancouver, B.C. – An exclusive interview posted to YouTube on February 6, 2015, offers rare behind-the-scenes insights into the hidden nature of a domestic cottage UFO Disclosure industry from the perspective of a Danish activist who put the Disclosure Petition VII on the Rolling Stone website. Former founder and Project Coordinator of the now-defunct #Artists for #Disclosure Thomas Kortholm spoke at length of a DisclosureGate with perceived ethical breaches from within the community supporting Paradigm Research Group Executive Director Stephen Bassett and how notice of errant Petition links blamed on a “possible hack” was struck from the “official” PRG Updates archive.

During the interview Thomas Kortholm emphasized repeatedly how at least one as-yet-unnamed highly-placed individual operating from within the Disclosure community boasted of committing multiple signatures effectively undermining the Petition’s integrity. That same party allegedly encouraged others to participate in generating fraudulent multiple Petition submissions as a means of achieving the required 100,000 signature quota without actually enrolling an equivalent number of public supporters. The Petition was in fact reportedly subject to nearly 1,000 fraudulent signatures during the course of its run. Many of those entries were provided by one E.T. from New York as shown in this video.

Reported PRG fundraising head Elizabeth Trutwin of Disclosure.media is named in Facebook Chat transcripts leaked by the volunteer Citizen Hearing on Disclosure translator in which she is portrayed insinuating attacks against Stephen Bassett and the presence of “idiots spreading rumors and hurting the movement” during dialogues with the Vejle, Denmark-based activist. The Disclosure Lobby creator is further revealed requesting an audit of Thomas Kortholm’s influence on fundraising, described in the interview as indicative of the lobby’s commercial, not Truth-inspired priorities.

The 46-year old husband and father would speak out over concerns that Stephen Bassett claimed a link to the White House/We the People-hosted petition technically malfunctioned over a two-day period when third-party documentation from ReverbNation showed advertising pointing to the same online location continued to function normally. Through his diagnosis of the supposedly broken link, Thomas Kortholm was able to determine that a simple typing error in which “q” was replaced with “g” was to blame. His greatest concern (revealed in transcripts shown to this reporter) was that the White House would disown the Petition on grounds of irregularity if Stephen Bassett persisted in requesting an extension citing 48 hours of fictitious link downtime based on typo-derived evidence alone.

The transcripts also show Stephen Bassett encouraging Thomas Kortholm to participate in media interviews and their engagement over the widely-propagated broken link claims along with the director’s response. According to these documents, the typo hypothesis and recourse to admission of fat-finger error were given little to no consideration while the Danish activist stood accused of “making a MOUNTAIN out of a Mole Hill,” as well as “gossiping and spreading rumors,” by the dismissive Elizabeth Trutwin.

The sum of Thomas Kortholm’s testimony adds up to define a scandal within the Politics of Disclosure. Leveraging only good will and strategic marketing tools available through online music and advertising distribution networks, the contactee videographer led a zero-budget activist campaign that (according to evident independent third-party documentation) put UFO Disclosure on the front pages of websites such as VH-1, MTV, IMDb, Billboard, Spin, Vibe and more. Documentation from independent third-party audits demonstrates the existence of advertising records which can be subpoenaed from ReverbNation’s servers to be examined for veracity by any court of law.

There is a substantial population aware of Disclosure initiatives and within that community Thomas Kortholm’s experience represents one story out of potentially millions. However, his citations of apparent institutional corruption based upon first-hand experience and documented with records that also reside on the servers of Facebook and other online platforms raises the red flag to such an extent that the former supporter now encourages the public to cease financing PRG-led disclosure initiatives. He has also withdrawn his Danish translation work for Citizen Hearing on Disclosure citing breach of agreement.

All of this may simply be the result of misunderstandings and as Thomas Kortholm readily admits, he may be entirely wrong in his interpretation of events. In a hypothetical parallel universe this may be true but in this world of finite resources it seems unethical to consider further promoting and financing such apparent incompetence, mismanagement and misdirected initiatives. America may be first on many fronts of innovation but given the present team’s seemingly dismal performance E.T. Disclosure in our lifetimes may be a jewel that escapes the grasp of such craven fingers.

Exhibits A through I

“I am unsurprised that some or another or even any disclosure initiative, here the subject Petition, might reveal what might appear to be anomalies tending the direction of undercutting or intending to undercut the credibility of those involved in the Disclosure field. The ET/UFO field is a realm of concern that concentrates and focuses numerous, including in my opinion the most, powerful societal interests many of which directly clash with each other and each’s stated and, where applicable, unnamed objectives. This, for me, including any prattling about anomalies claimed to be definitively this or that respecting some or another person or persons in that field, seems to me an expected phenomenon. In fact, I’d be genuinely surprised by the absence of such.

“Speaking of clashing interests, Mr. Webre has clashed personally with Mr. Bassett in a series of stinging, unresolved incidents over the Citizen Hearing, from which if I recall correctly Mr. Webre feels he was turfed, if I can put it that way. Further to this, one could suggest that such fallings-out have by now formed what appears to be a pattern in Mr. Webre’s life. Suffice it to say for all these reasons I’m unsurprised Mr. Webre’s website is generating this story.”

[As a matter of clarification, Chat archives residing on Facebook’s servers demonstrate how NewsInsideOut.com columnist Jon Kelly was approached by DisclosureGate whistleblower Thomas Kortholm, not that NewsInsideOut.com acted in any way to “generate a story” as suggested in Tom Clearwater’s response above. NewsInsideOut.com’s favorable initial coverage of #Artists for #Disclosure emphasized “the most personal issues of contact along with its ethical and spiritual implications.” The activities of Stephen Bassett have been subject to prior investigations by journalists including Alfred Webre, whose findings demonstrated unethical professional and financial dealings on the part of the PRG director. See: DisclosureGate: Former Congress members bribed over Cheney’s secret Mars program]

Updated February 9, 2015: Paradigm Research Group Executive Director Stephen Bassett continues to claim “the petition site itself was down for three days” after receiving public notice of independent audit by third-party ReverbNation showing evidence to the contrary. Who is telling the truth? 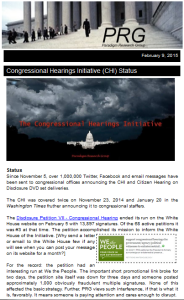