The Morningstar Transformations website invites participants to “Take a Journey to Inner Space this summer. Discover new frontiers of human potential and adventure in this exclusive evening. Learn secrets of unconscious communications that anticipated events of the Iraq War. See photographic portraits of the Sanskrit avatars of Viṣṇu in breath condensation during meditation. Experience contact with UFOs in a night vision skywatch. If you’ve read “Hidden Messages in Water” and “Autobiography of a Yogi,” or watched “Close Encounters of the Third Kind,” you will not want to miss this next-level event!” 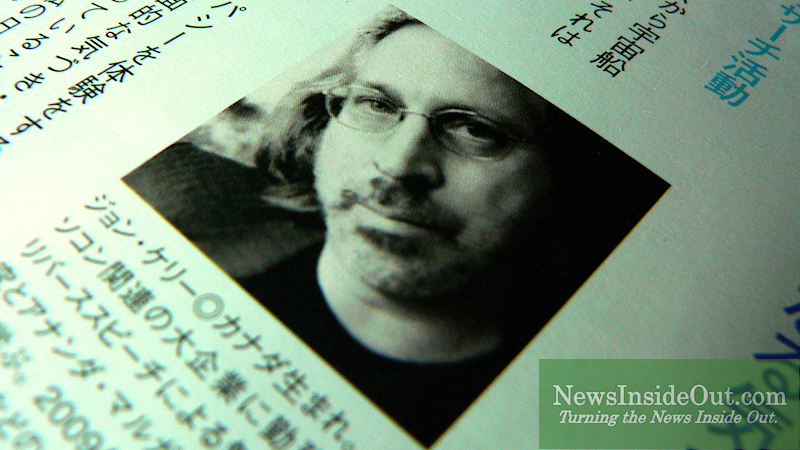 Jon Kelly’s internationally acclaimed body of original independent research covers communications phenomena of the unconscious mind, classical yoga meditation, photographic portraiture of the Vedic avatars of Vishnu, two-way visual communications with UFOs captured on tape and the inner dimensions of ET Contact. A pioneer in the application of 3CCD broadcast video and digital night vision camera systems, Jon Kelly has been active as a UFO journalist since 2009 with articles covered by mainstream publications including USA Today, Irish Independent and the Dallas Morning News. His career in broadcasting and investigative journalism began ten years earlier in a very popular role that resulted in number one Nielsen-ranked television news for CBS in 2006.

“Journey to Inner Space 2015,” a UFO Contact night vision skywatch event with former CBS Radio feature producer Jon Kelly takes place July 15, 2015, from 8:00 to 11:00 p.m. Admission is $20 cash only at the door. For more information and directions to this exclusive event readers can call 604-531-5156 or visit the Morningstar Transformations website (http://morningstartransformations.com/).

Cleveland, OH – An exclusive new video posted to YouTube on June 27, 2015, offers a look back at a historic television broadcast investigating claims of secret messages encrypted backwards in human speech and the information contained therein. Independent research into unconscious communications conducted by NewsInsideOut.com’s Jon Kelly was the subject of a report for CBS 19 Action News WOIO-TV in Cleveland, Ohio.”Secret Messages” aired November 13, 2006, to garner a number one rating during that season’s Nielsen sweeps.

The local CBS news report followed upon research that had anticipated details of the Iraq War and identified the BTK Killer. In the years to follow it would name Russian spy Anna Chapman’s accomplice and disclose Edward Snowden’s UFOs months before the mainstream press. Mental health professionals including Seattle Psychologist Dr. Susan M. Engman, PhD, would testify to the pragmatic efficiency of listening to unconscious speech reflected in a digital audio mirror, citing its psychoactive potential supporting catharsis in one session.

NewsInsideOut.com’s Jon Kelly explains. “Catharsis in one session was not what the local news team was planning to discover during a two hour closed-door taping session. The reporter’s journey from skeptical mockery to visible discomfort as details of what she described as her “personal” life unfolded in the room during taping is shown during the segment.

“If CBS had anticipated an ambush and subsequent media bloodbath the integrity of my work was unable to accommodate any such suggestion during that particular taping. My visit to Cleveland was notable for a night in hotel room 1313 and a personal tour of the Cleveland Grays Armory Museum. The production team worked closely with me during my stay, ensuring a memorable encounter and an inside look at local news media network television broadcast operations of that era.

“The number one Nielsen rating for that broadcast informed me how by 2006 my work had conceived the spirited focal points of the collective imagination for both radio and television audiences alike. I continue to produce private sessions by telephone and develop online video production for both YouTube and NewsIO Plus that explores Consciousness, ET Contact and Spirituality.”

Kelowna, BC – An exclusive new three-part video series (Parts I, II, III) published to YouTube on June 25, 2015, explores the work of Emotional Alchemist Laurie Morningstar including a Summer Solstice celebration inside of a pyramid, spiritual experiences while Lakota Sun Dancing plus an Entering the Sacred Heart meditation exercise that viewers can try for themselves. NewsInsideOut.com’s Jon Kelly was at the Summerhill Pyramid Winery in Kelowna, British Columbia, where an audience of close to 100 people attended a 2015 Solstice celebration hosted by founder Stephen Cipes. The three-part Emotional Alchemy series furthers NewsInsideOut.com’s documenting the work of authentic spiritually-focused wellness practitioners.

An online bio describes how, “Laurie Morningstar facilitates healing and is an emotional alchemist and ascension teacher, specializing in reconnecting our energetic systems such as the beams of light, natural Mer Ka Ba and accessing the Sacred Heart. She has a Master’s in NLP, Hypnosis, Timeline Therapy and Reiki and has Advanced Techniques, Symbology and Initiation in Huna (a form of Hawaiian spirituality) all of which she acquired in the late 90’s. Laurie has training in Ener Chi, Neurolink, Deep Tissue Structural Realignment and Lomilomi. She Sundanced for 8 years and continues to use ceremony, healing and songs from this tradition. Another specialty is clearing the energy of sexual abuse and soul retrieval. Laurie was one of the first 52 teachers for Drunvalo Melchizedek’s ‘Awakening the Illuminated Heart’. She now integrates this information as well as much more healing in her own workshop Sacred Heart Creations.”

In the video series, “Emotional Alchemy with Laurie Morningstar Part I” takes viewers deep inside of the pyramid at Summerhill Pyramid Winery for a live event featuring Laurie Morningstar leading a group of close to 100 people in Emotional Alchemy breathwork and visualization. Performance on a traditional First Nations drum propels the group mind to deep introspection with the practitioner describing the evolution of her work while offering perspectives on the psychology of association and embodiment. For Laurie Morningstar, the beat played inside of the pyramid was the “heartbeat of Mother Earth.”

“Emotional Alchemy with Laurie Morningstar Part II” features Laurie Morningstar in a wide-ranging interview that discusses Entering the Sacred Heart meditation, Emotional Alchemy, Sun Dancing and contact with the ancestral Grandmothers. The alchemist describes how her public work with emotions clears the way for deeper expressions of love embodied through unfolding Akashic (Sanskrit: ethereal) records and access to the heart’s creative potential. A part of this talk emphasizes how the universe responds in practical ways to personal desires when one’s sense of “I”-ness and doer-ship is relinquished.

For more information about workshops and private consultations with Laurie Morningstar readers can visit her website Morningstar Transformations (http://morningstartransformations.com). For more information about ongoing community events at the Summerhill Pyramid Winery in Kelowna, British Columbia, readers can visit the All One Era website (http://alloneera.com).

‘How I knew my Spirit Guide was with me’: Exclusive preview from Dwanna Paul