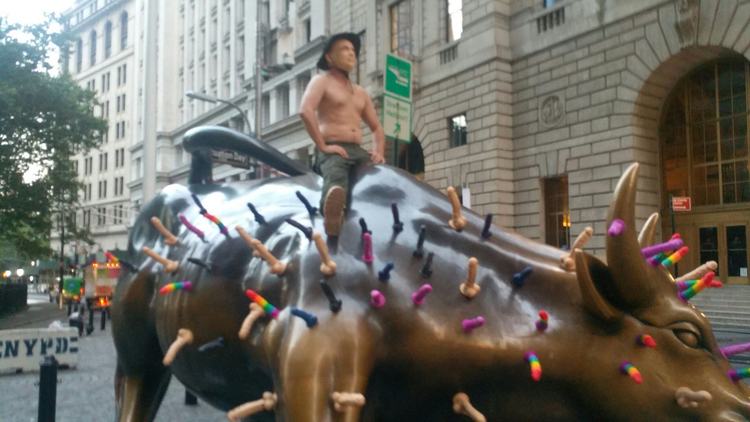 Perhaps one of the first public indications of President Trump’s Russia problem involved an exclusive May 2017 photo-op in the White House where U.S. media were denied access. The U.K. Guardian then reported how “The White House is facing criticism for a possible security breach after it allowed a Russian news service photographer into the Oval Office to snap photos of Donald Trump and a pair of top Russian officials.”

“Does the Russian government have any compromising material on President Trump or his family?” asked the Associated Press’s Jonathan Lemire during Monday’s presser. “It’s difficult to imagine an utter nonsense of a bigger scale than this. Please, just disregard these issues and don’t think about this again,” responded Russian President Putin in a vaguely mind-controlling sort of way.

Granular analysis of President Trump’s remarks can resequence locally time-reversed grains of speech to synthesize new meaning from digital reflections of the audio soundtrack. A series of NewsInsideOut.com reports (see links below) have described how this approach successfully determined facts of global wars, serial killer identities as well as Russian, Israeli and U.S. intelligence operations days, weeks, months and years before they were accepted as mainstream knowledge.

Below is a partial transcript of the secret messages heard in the video ‘’Sex with Daddy’: Trump Helsinki Secret Messages Revealed” where messages from the July 16, 2018, Russian-United States summit press conference are indicated in bold followed by the context in which they were first discovered.

I need punishing: I think that we will be competing, when you talk about the pipeline. I’m not sure necessarily that it’s in the best interests of Germany or not, but that was a decision that they made. We’ll be competing. As you know, the United States is now (or soon will be) but I think it actually is right now the largest in the oil and gas world. So we’re going to be selling LNG [Liquid Natural Gas] and we’ll have to be competing with the pipeline.

His love: dildos/Sex with daddy: And I think we’ll compete successfully (although there is a little advantage locationally). So I just wish them luck. I did. I discussed with Angela Merkel in pretty strong tones but I also know where they’re all coming from. And they have a very close source. So we’ll see how that all works out. But we have lots of sources now and the United States is much different than it was a number of years ago when we weren’t able to extract what we can extract today. So today we’re number one in  the world at that and I think we’ll be out there competing very strong.

Give us yellow lips/Acid vanishes yellow/The dildo with blood on it: Yes I do. I hold both countries responsible. I think that the United States has been foolish. I think we’ve all been foolish. We should have had this dialogue a long time ago. A long time (frankly) before I got to office. And I think we’re all to blame. I think that the United States has now stepped forward along with Russia. And we’re getting together. And we have a chance to do some great things. Whether it’s nuclear proliferation (in terms of stopping). Have to do it. Ultimately that’s probably the most important thing that we can be working on.

Use the blackmail: We won that race and it’s a shame that there could even be a little bit of a cloud over it. People know that. People understand it but the main thing (and we discussed this also) is zero collusion. And it has had a negative impact upon the relationship of the two largest nuclear powers in the world. We have 90 percent of [global] nuclear power between the two countries. It’s ridiculous. It’s ridiculous what’s going on with the probe.

Evil bugs out of my office: And I have to say if they had it it would have been out long ago. And if anybody watched Peter Strzok testify over the last couple of days (and I was in Brussels watching it) it was a disgrace to the FBI. It was a disgrace to our country. And you would say “That was a total witch-hunt.” Thank you very much everybody. Thank you.

In detailing her encounters with the then-pregnant First Lady’s husband the now-iconic stripper reportedly told CBS 60 Minutes “I was like, ‘turn around, drop ’em.’ So he turned around and pulled his pants down a little– you know had underwear on and stuff and I just gave him a couple swats.”

The sex toy motif arises from the transcript in a way that suggests the president endured a humiliating extortionate review of intimate sexual practices during his private one-on-one meeting with Russian President Putin. Apparently the president has a fetish for sex toys and this indiscretion is known to the Russians.

The incestuous motif appears in a way that amplifies the president’s legacy public remarks. A reporter for Rolling Stone wrote in 2015 how “After I met Ivanka and praised her to her father, he said, “Yeah, she’s really something, and what a beauty, that one. If I weren’t happily married and, ya know, her father . . . ”.

Contextual use of the term “Daddy” after meeting with Russian President Putin invites consideration of one darker possibility, that Donald Trump suffered an incestuous injury as part of his paternal heritage where that unhealed emotional injury presents a vulnerability to psychological manipulation through the influence of a male figure who seeks to dominate.

In Monday’s remarks to the press President Trump stated “They said they think it’s Russia; I have President Putin, he just said it’s not Russia,” according to the U.K. Guardian. “I will say this: I don’t see any reason why it would be. I have great confidence in my intelligence people, but I will tell you that President Putin was extremely strong and powerful [emphasis added] in his denial today.”

President Trump in this way compared the secretive summit to a sexual encounter with President Putin, wherein Putin plays a dominant or “Daddy” role.

The yellow motif appeared as the subject of a 2017 report covering then President-elect Trump’s Pee Tape press conference. At that time this reporter wrote how “Characterization of the president-elect as a urophile invokes notions of sadism and masochism that further public perceptions of seeming Trump weaknesses for public shaming and humiliation, uttering creepy suggestions of incest and chumming with pedophiles on “Sex Slave Island.” Urophilia was a topic discussed in the Steele dossier, a controversial document whose allegations the president-elect responded to in those 2017 remarks.

Acid that vanishes the yellow offers the possibility of mind-control applications involving narcotics such as LSD in obscuring memory, or the sanitization of the scene of a sexual crime (up to and including deaths of some parties involved). Blood offers a classical symbol of mortality, including injury and death. The pairing with a sex toy projects images of sexual injury or death accompanying sexual practices. Apparently these events are known to the Russians.

Blackmail suggests the existence of an extortionate dynamic in which President Trump is the victim and President Putin his oppressor. Monday’s Washington Times reported how House Democratic Leader Nancy Pelosi “suggested the Kremlin is blackmailing President Trump Monday, suggesting Russia has something against the president as the two world leaders met in Helsinki, Finland.”

Office bugs suggest a Nixonian paranoia in the Trump White House reflecting how the Watergate-shy 37th president surveilled everyone (including himself). In March 2017 President Trump tweeted “Terrible! Just found out that Obama had my “wires tapped” in Trump Tower just before the victory. Nothing found. This is McCarthyism!”

Upon considerable review it seems impossible for the above circumstances to arise by accident, where the investigator has a proven track record of identifying Russian operatives on U.S. soil and where previous investigations have exposed the same thematic materials. While studying the president’s 2016 remarks at CIA headquarters in Langley, Virginia, this reporter then determined how Trump intended to “Lie for Russia”.

If the above results are to be believed, it appears Russia won the Cold War and that the office of the President of the United States now acts as a default Russian proxy upon the global stage under threat of extortion of its occupant. With these conclusions in mind this reporter foresees how like a rudderless ship the United States will continue to collide with trusting allies on issues of economic unity and global policy until its own population tires of Reality Television politics to elect an entirely authentic, unimpeachable leadership.

Message to Kim: Character Trumps Nukes and Spies in Global Leadership Race with Jon Kelly on End of Days: The Michael Decon Program