The British Columbia Contactee and guerilla film maker is currently in ongoing production for a new independent documentary under the working title “Hello, UFO”. When asked to explain what his most recent skywatch video captured Les Murzsa cited historical context within which the weekend sightings occurred, recounting events as “Consistent with my past experiences filming in the neighborhood.”

“I am certain that they are not balloons . . . At the beginning of the sighting there are two distinct objects. Let’s call them red and black. Not only do smaller white spheres appear but the black object comes and goes throughout the rest of the sighting. At times it appears to be part of the red object and no longer an object of its own . . . I caught sight of it when it was no more than 20 feet above the sidewalk at the North East corner of the park meaning we were within approximately 100 feet from the UFO.”

A deeply intuitive Les Murzsa contextualized this sighting experience with the following descriptive language stating, “If my theory is correct that these objects are dimensional entities then we and the public at the park had an extremely close encounter with an E.T. at ground level.

”It is my belief that these objects can pass into the earth and so I believe this UFO came out of the ground at the edge of the park because he knew that we were there filming and was presenting himself for us to capture the sighting on film.” 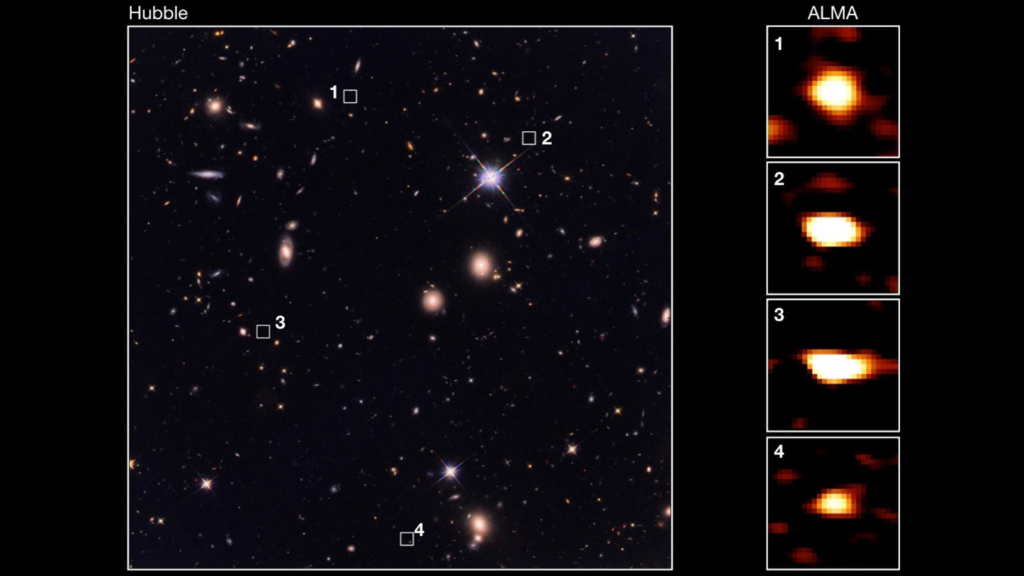 Like the Atacama Large Millimeter Array (ALMA) Observatory that captures images of supposed invisible galaxies the 3CCD camera (JVC GZ-HD7US) used in Les Murzsa skywatch events normally operates at or beyond the range of its optical resolution. The multi-sensor camera achieves this by using digital magnification.

Under such conditions rendering distant subjects may introduce visual artifacts distinct from actual appearance (determined upon closer examination). In terms of identifying subjects zooming in on pixels offers a closer look while adding significant noise to the signal.

Upon review of the ALMA images, readers may agree there are not many galaxies that actually appear to have stair step-aliasing geometries. Those characteristics are evident artifacts of digital magnification from an observational system operating at or beyond the threshold of its optical range.

In summary, the ALMA invisible galaxies certainly don’t look like clusters with hundreds of billions of discrete stars and other celestial objects. Yet they continue to offer currency as media in the scientific press. In this climate the Les Murzsa video archive offers an opportunity for the public to consider scientific potential of multi-sensor camcorder registrations of limited resolution documenting and informing further documentation by others of potential Contact with other intelligent civilizations.

In attempting to address some of the questions raised by Les Murzsa’s substantial catalog of video images this reporter has introduced a higher-optical magnification imaging system (Panasonic AG-DVC30) into the skywatch events. The E.T. experiencer’s field leadership directing a camera team capturing images in Southwestern British Columbia resulted in stunning daylight and starlight images that amplify conclusions regarding the mysterious origins of these subjects.

Outtakes from those additional sightings included in the August skywatch video were recorded both at the same Mount Pleasant location in 2014 and within city blocks in 2011.

Due further consideration are the various ways in which cities appear as magnets for garbage and pollution with seemingly unlimited plastic bags and Mylar balloons drifting overhead. It may be hyperbolic to suggest the August skywatch images show anything more than balloons and a harbor seaplane at extreme range.

However, disproportional jitter along the image’s vertical axis exhibited by the subject as a tree branch comes into view in August 3, 2019, footage is difficult to explain as normal level flight by an airplane (although this appearance may be an artifact of the JVC camera’s Optical Image Stabilizer (OIS)).

Instrumentation measuring phenomena introduces noise to any experiment and future research will need to be able to successfully distinguish this noise from clear signals in order to successfully advance. 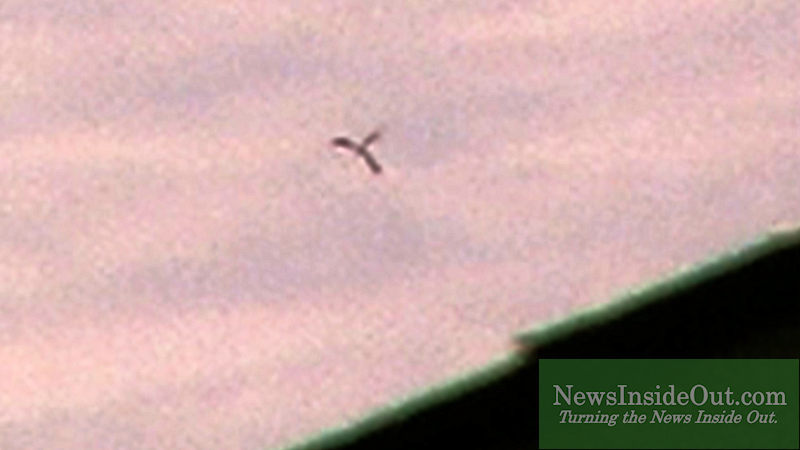 It is this reporter’s documented experience that redundant multi-sensor instruments have registered images at closer optical magnification on numerous occasions when Les Murzsa was directing the camera team. Those registrations furthered the E.T. hypothesis rather than debunking it awakening a sense of how the continuity of Les Murzsa’s ongoing independent UFO studies can contribute to a scientifically-informed educational understanding of Contact phenomena.

Les Murzsa’s August skywatch procedure includes use of JVC’s Focus Assist feature offering a powerful subject-detecting capability that in numerous cases leads the videographer along his path of discovery. This behavioral characteristic of the investigator intersects with an interesting philosophical thread regarding machines identifying subjects for the operator to study (versus an operator-led approach).

Capitulation to cybernetics appears like a migration beyond metaphorical boundary lines related to artistic and creative expression of a transpersonal state in which the camera operator merges with the operation, where responsibility for leading investigation is de facto transferred to artificial intelligence (AI).

This theme finds widespread expression in popular music’s embrace of Kraftwerkian trances among today’s DJs and electronic instrument operators who follow the beat wherever it may lead them. Under these altered states of consciousness it appears possible subjects may approach the observer as per the claims of Yakima Lights investigator David Akers.

In the Report on the Investigation of Nocturnal Light Phenomena at Toppenish, Washington AUGUST 1972 David Akers wrote how photographic captures were produced by phenomena that approached the electrical engineer.

“The investigative approach used involved setting-up portable observation points at selected locations in the study area for several days at a time. This technique allowed the observer to become acquainted with normal activity in a given location and prepare him to detect any abnormal activity which might occur. No concerted effort was made to “chase” the phenomenon around the reservation. Instead, it was allowed to come to the observer (emphasis added).”