Vancouver, BC – An exclusive new video published to YouTube on November 13, 2015, purports to document the discovery of evidence that President Barack Obama has received credible intelligence concerning the personal security of French President François Hollande. The president spoke yesterday in the wake of the Paris attacks in France that left nearly 160 dead as of this writing and the country under a state of emergency. In his statement to the press, President Obama described the tragedy as “An attack on all of humanity and the universal values that we share.”

Agence France-Presse reported in March 2014 how a jihadist group “repeated its calls for French president Francois Hollande‘s assassination in revenge for the European nation’s recent interventions in Africa,” It went on to state how the “al-Minbar Jihadi Media Network, a militant Islamist web site with ties to al-Qaeda, says it wants Muslims to stage attacks in France and on French interests elsewhere in support of Muslims in Central African Republic and Mali.” Australian Prime Minister Malcolm Turnbull was reported saying that yesterday’s attacks appeared “to have all the hallmarks of Daesh [ISIS/CIA].”

The sentiment of President Obama’s unconscious disclosure suggests a possible shift in relations between the U.S. with France now the target of another potential “Je Suis CIA” covert false-flag attack intended to destabilize the government. Although it is not exactly clear what may have soured relations between the two leaders, Paris was previously the scene of attacks at the offices of satire publication Charlie Hebdo that took place in January of this year. It was an event that further highlighted what some call a clash of civilizations with front lines now appearing entrenched in major European cities. 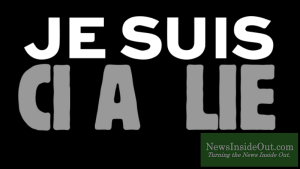 The New York Times wrote in May, 2012, how President Obama had reserved for himself the final moral calculations necessary for ordering drone strikes against targets drawn from secret kill lists. The Bureau of Investigative Journalism reported in October that total drone strikes under Obama in Pakistan, Somalia and Yemen then numbered 491. Whichever of those strikes involved the presence of family or members of the public (think wedding parties), the president envisaged their deaths (according to the command structure reported by the Times).

According to the newly released video, such a veteran morbid stare has now set conceptual sights upon the French president. According to the Australian prime minister it was CIA’s proxy army ISIS who conducted today’s attacks.

An intelligence assessment of the soundtrack from the president’s statement utilized a mirror filter to digitally reflect his speech signal in order to detect unconscious communications. Like the mirror on a reflector telescope, such impressions offer provably accurate insight into a streaming subtext of sleep talking-like comments from inner space.
NewsInsideOut.com has previously reported how the same procedure publicly revealed details of the Iraq War, identified the BTK Killer, named Russian spy Anna Chapman’s accomplice and uncovered the UFOs and ETs in Edward Snowden’s NSA cache weeks, months and years before such information became widely-accepted public knowledge. Below is a partial transcript of President Barack Obama’s statement, followed by the secret message encrypted backwards therein.

President Obama: “I’ve chosen not to call President Hollande at this time, because my expectation is that he’s very busy at the moment. I actually by coincidence was talking to him earlier today in preparation for the G-20 meeting. But I am confident that that I will be in direct communication with him in the next few days, and we’ll be coordinating in any ways that they think are helpful in the investigation of what’s happened.”

Secret Message: “I see him dead.”

Here is the verbatim of his remarks as reported by ABC New York:

“France is our oldest ally. The French people have stood shoulder to shoulder with the United States time and again, and we want to be very clear that we stand together with them in the fight against terrorism and extremism. Paris itself represents the timeless values of human progress. Those who think that they can terrorize the people of France or the values that they stand for are wrong.

“The American people draw strength from the French people’s commitment to life, liberty and the pursuit of happiness. We are reminded in this time of tragedy that the bonds of liberte, egalite, fraternite are not only values that the French people care so deeply about, but they are values that we share. And those values are going to endure far beyond any act of terrorism or the hateful vision of those who perpetrated the crimes this evening. And we are going to do whatever it takes to work with the French people and with nations around the world to bring these terrorists to justice and to go after any terrorist networks that goes after our people.

“We don’t yet know all the details of what has happened. We have been in contact with French officials to communicate our deepest condolences to the families of those who have been killed, to offer our prayers and thoughts to those who’ve been wounded. We have offered our full support to them. The situation is still unfolding. I’ve chosen not to call President Hollande at this time, because my expectation is that he’s very busy at the moment. I actually by coincidence was talking to him earlier today in preparation for the G-20 meeting. But I am confident that that I will be in direct communication with him in the next few days, and we’ll be coordinating in any ways that they think are helpful in the investigation of what’s happened.

“This is a heartbreaking situation, and obviously those of us here in the United States knows what it’s like. We’ve gone through these kinds of episodes ourselves, and whenever these kinds of attacks happen, we’ve always been able to count on the French people to stand with us. They have been an extraordinary counterterrorism partner, and we intend to be available to them in that same fashion. I’m sure that in the days ahead, we’ll learn more about exactly what happened, and my teams will make sure that we are in communication with the press to provide you accurate information. I don’t want to speculate at this point in terms of who is responsible for this. It appears that there may still be live activity and dangers that are taking place as we speak. And so until we know from French officials that the situation is under control and we have more information about it, I don’t want to speculate.”